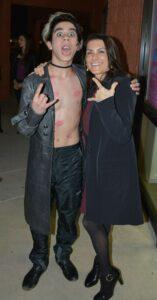 Tamera Shanker and I sat on the patio of Forno 301 earlier this month, with her dog Javier accompanying, to talk about what it’s like now that Ethan, her youngest, is graduating from ASA.

As an attorney, Tamera Shanker’s practice focuses on Children’s Advocacy, Adoption Law, Juvenile Law, and Civil and Administrative Appeals.  Her firm also works in the areas of Environmental and Natural Resources Law and Litigation, and American Indian Law among others.  It’s clear from our conversation, her professional focus, and her commitment to ASA that she cares deeply about young people, the environment they grow in, the opportunities they get, and the development of their own voices.

Ethan is a decade younger than his sisters, both of whom attended Desert Vista High School.  He was 69th on the waiting list for ASA going into his freshman year of high school.  Because it was uncertain whether he would get in to ASA, Tamera and her husband Howard, enrolled Ethan in Desert Vista where he began classes since Desert Vista starts two weeks earlier than ASA.  The evening before ASA was to begin classes, they got notification of Ethan’s acceptance.  He started at ASA the next day, and completed the transfer process later that week.

Ethan started getting interested in musical theatre at age nine, and like a lot of kids, became involved in the large youth theatre scene in the Valley.  Tamera credits Ethan with bringing ASA to their attention as a high school option.  She asked a professional colleague who had kids at ASA about the school.   With a reputation for rigorous academics in the morning and arts conservatory in the afternoon, it seemed like it could be a good fit for a young artist like Ethan.

Tamera says that those students who do well at ASA are those that “thrive in a community environment.   You are a recognized, integral part of the community even if you’re not trying to be.  Teachers, administrators all know the student body.  And that means something as a parent when people come up and say they saw Ethan in something, and they know him.”  The relatively small student population is a major factor in this community feeling.

When young people get involved in youth and community theatre, often times their parents come along as well, helping to build sets, construct costumes, sell tickets, usher, and a lot more.   So when Ethan came to ASA in theatre, there was no question in Tamera’s mind that she would do what she could do to help support the art.  This has included volunteering time, purchasing equipment, providing meals.  “Making the kids feel like they’re important, and not just an after thought,” she says.

“To understand what goes into a stage production gives you so much more appreciation when you’re the audience member.  When you’re right there and there’s the choreography, and they’re hitting the notes, and the scene is changing.  There’s a certain pride, like in Little Shop (of Horrors) I’m thinking I built that wall!  I sewed those sequins.  There’s an investment in the production…you become a stakeholder.  You’re also so much more appreciative of what it takes to make the magic happen on stage.  If your child is participating in theatre…you don’t think, my kid’s goofing off.  No, they’re working hard.”

Tamera recommends for parents wanting to volunteer, to “Jump in with both feet.  Approach volunteerism as an opportunity versus a burden.  You’re going to learn more about what’s happening with your own kid, especially during the high school years. It may surprise some, but adolescents aren’t always enthusiastic communicators with their parents! [wink] And you’re going to meet some fabulous people.”

She credits Jill Watts, our Theatre Department parent liaison, with putting systems in place to make it easier for people to sign up.  The result is a vigorous parent volunteer program that provides meals, transports production elements, helps construct and strike productions, and provides and sells concessions.  It does not take a lot of money or time, whatever people can provide, but it makes a world of difference.

Inevitably, there is talk about the future since Ethan graduates in a few weeks.  He is pursuing the arts through his music.  “I feel that this training (at ASA) is directly feeding into his long-term goals.  But you know, if he wants to be anything else, all these skills are transferrable.”  We talk about those skills in relation to the theatre senior project, an original play devised, performed and produced by the ensemble.

“They were held to the expectation that they had to collaborate which is a lifelong skill.  And they were able to collaborate.  They were compelled to take collective responsibility to deliver a final production.  It doesn’t matter what the outcome was – and I thought it turned out great – it was the process.”  That was the point, and it’s nice to hear without any prompting.

For herself, Tamera would like to stay connected with ASA beyond Ethan’s graduation.  “I believe in what ASA is maturing into.  I want to see where it all goes, and not just as a spectator but as a supporter.”  Eventually it’s time to go our separate ways – Tamera and Javier heading west to their car, and me east, back to campus for mine.  I thank her for taking the time to talk and for the support she’s given the school over the past four years.   We both hope the school can develop ways to continue to engage alumni and parents once they graduate so conversations like these can continue.