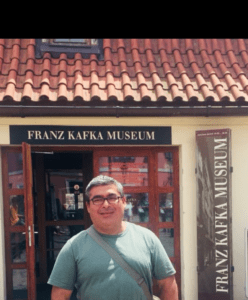 For those that don’t know me, my real name is Ramón Miranda and I am one of the Spanish teachers at ASA. If you are wondering why I say this, since I started working at ASA, I have been called many different names. All of them have been good names, of course. Some of these names include:  Mr. Miranda, Señor Miranda, Super Miranda, Manuel, Maron, etc… My favorite name is SEÑOR! If you translate SEÑOR to English it means Sir or Mister. So, simply put, I am Sir or Mister. I love it!

I moved to Arizona from Mexico in 1991 after attending The National Autonomous University of Mexico (UNAM) in Mexico City to continue my studies at Arizona State University (ASU). I have a Bachelor Degree in Spanish and a Master Degree in Latin American Literature. I have been a Language Teacher for over 27 years and this year I started my 17th year here at ASA.

I found my second home when I started teaching at ASA in 2002. I was the only Spanish teacher then, before the expansion of ASA. Then, I taught all the levels of Spanish. Now, I teach one class of Spanish 3, two classes of Spanish 4, and Spanish 4 Honors. Besides being a Spanish teacher, I am the Foreign Language Department Chair and the Student Government (StuGo) Advisor. I have also coordinated several trips to Mexico, Europe and South America. We’ll see where we go next!

Another one of my meaningful relationships with ASA is not as a teacher, but as a parent. My son, Diego started at ASA in 6th grade (before there was a 5th grade!) and graduated in 2012. Diego continued what he started at ASA and received his Bachelor Degree in Guitar Performance from the University of Denver and his Master Degree in Guitar Performance from Arizona State University. I love working at ASA and I loved being a parent here!

In my free time, I like to listen to music and attend music concerts. In addition, I practice several sports including soccer, racket ball, and hiking. Above all, I love reading and traveling!