Say the name “Profesor” to any student studying Spanish at Arizona School for the Arts (ASA), and you’re bound to get a laugh and a wild story in response.

“Every single class, he would eat a banana. And at some point during the year, he switched to oranges, but it’s really just been about bananas.”
—Elaina P.

“He would have us go outside and do six-pack exercises and pretend that we were crushing our enemies to motivate us.”
—Izzy B.

“I think about him eating a lot of bananas, and playing soccer and being the best player out of all of us.”
—Cami S.

“I think of his funny stories, and I think of bananas. I know everyone probably already said bananas.”—John Paul R. 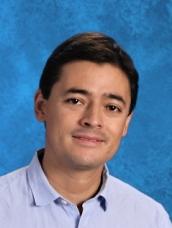 After four years of teaching Spanish II and Spanish III at ASA, Oscar Miranda—better known as Profesor—has built quite a reputation among the student body for being energetic and brimming with stories. However, there’s more to him than just a memorable personality. In fact, Miranda is a truly unique teacher who strives to discover new perspectives and to improve the world on a grand scale.

When I sat down to interview Miranda, he was wearing a navy blue sweater over a striped, collared shirt. Short, black hair covered his forehead, and around his neck was a distinctive blue lanyard, which read “BOOM! ZAP! WHAM!” in bold, comic-book font. In the background, percussion resounded from the adjacent practice room, but he had no trouble speaking over the noise.

“I was quite independent when I was growing up,” he said, waving his hands with an enthusiasm that rivaled the energy of his lanyard. As the middle child of three brothers in Bogotá, Colombia in South America, Miranda learned from an early age to make his own decisions. With both of his parents working, he would navigate the city on his own and even cook for himself. When asked if he ever expected to become a Spanish teacher in the United States, his lips pulled into a grin. “No, not at all. Not a chance. When I was a kid, from five to probably twelve, I wanted to be a president.” Over time, his career interests shifted from politics to biology to industrial design. In 2005, he graduated from La Universidad Nacional de Colombia with a B.A. in Sociology: the study of the development, structure, and functionality of human society.

As a sociologist, Miranda hoped to help Colombians who were victims of violence by groups such as the government. “I was quite idealistic when I was young,” he said. “I thought that we were going to make a revolution, and we were going to change the future of Colombia.” Soon after graduating, he received a job offer from the United Nations (UN) to investigate the displacement of 4 million Colombians and determine their land rights. Although the offer appealed to him, two obstacles stood in the way. One was funding: the money provided by the UN was being redirected to different institutions, which decreased the salaries of the people they employed. The other was the risk: it was extremely dangerous to collect data in areas where violent groups were still active, and many sociologists had died during the process. Ultimately, he decided, “It was too dangerous to continue this path,” so he began searching for another job.

Miranda’s first experience working with children was in 2006, when he spent a year in England volunteering for a project named Mentors and Peers. His job was to gather information about children who were out of the school system, including immigrants who didn’t speak English and students with financial or learning difficulties. “I had one kid whose mother was addicted to heroin,” he said. “I had to write in my report if the mom was there, if the mom was under the influence of heroin, and if the kid had access to heroin. It was very interesting. I liked it a lot.”

From 2008 to 2010, Miranda taught fifth-grade social studies in Colombia. Then, he began teaching online college courses and in-home Spanish lessons. It was around this time that he met his wife, an American professor at a prestigious Colombian school. “She was beautiful,” he said. “No kidding, the light from the window was shining on her back, so she looked completely radiant. She was shining at the door. I thought, this is the most beautiful girl I have ever seen in my life.”

Eventually, the two got married and had a son named Vincent. They lived together in Colombia for two years. One day, Vincent fell ill, so they brought him to a hospital for emergency medical care. However, a doctor didn’t arrive until 6:00 AM the next morning. “It was very scary for [my wife] to see that,” he said. “To wait all these hours for a doctor to see our child. Life in Colombia is good, but it’s not easy.” This experience led them to reconsider where they wanted to raise their son.

Therefore, in 2012, Miranda and his family relocated to his wife’s home in Omaha, Nebraska, where he began teaching high-school Spanish and geography. “The United States is a place with many immigrant populations,” he said. “It’s very easy here to adapt to the system, so it wasn’t that difficult for me.” Two years later, they moved to Arizona, seeking a better area. It was then that Miranda interviewed for a job at ASA, where he now teaches Spanish II and Spanish III. To quote the ASA website, these courses are designed to “improve [students’] ability to create with language, expand risk tasking in real-life communicative situations, and gain greater insight into the varied perspectives offered by the study of the Hispanic culture.”

As a teacher, Miranda strives to engage his students in new and interesting ways. This is what makes his teaching style so unique. “ASA has something that I think the teachers appreciate a lot: the freedom to create our own lessons,” he said. “Some of the best classes that I have ever taught are things that aren’t in any book.” In the future, he hopes to earn a Masters degree in a technological field. Another goal of his is to continue traveling the world and to provide similar opportunities for his children. If he could give one piece of advice to every student he encounters? “Don’t give up fighting for what is right. Because we cannot stop fighting. Don’t be afraid to do the right thing.”