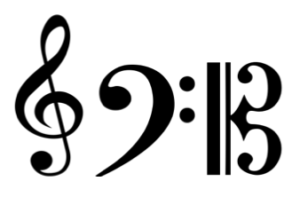 Dr. Wuenschel plays and teaches the viola, which reads in alto clef (right). Violas are usually overlooked in an orchestra by the violins and cellos, which read in treble (left) and bass (middle) clefs, respectively.

Often, Allyson Wuenschel seems as youthful as the children she teaches at Arizona School for the Arts (ASA). She is commonly smiling, looking casual but cool in her shawls and long-sleeve shirts, experimenting witha green color in her hair. While she’s a professional in her field, she carries a child-like enthusiasm wherever she goes. She laughs and smiles often and participates in her students’ camaraderie. Though she has gone through great changes, such as transitioning from a kid surrounded by forests to a teacher encircled by deserts, as well as developing into a Doctor of Musical Arts, she has never lost her enthusiasm. 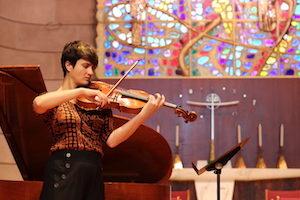 Today, Dr. Wuenschel is wearing grey pants with a patterned shirt, a grey and red shawl, and a necklace and bracelet. As she reminisces about her childhood, she often pauses to smile as if she is reliving the moment.  She was born in 1982 in Boise, Idaho. She recalls her childhood amongst the beauty of Idaho, with sprawling forests and abundant sagebrush — quite different from a typical landscape in Phoenix. “I loved to snowboard when I was in high school…that was something that kept me going through high school in a big way,” she says, while looking down with a rueful smile. She still misses it. When she moves on to talking about the racial homogeneity in Idaho, she sits still, her hands embraced in her lap. She acknowledges a racism problem in northern Idaho, and explains how her hometown of Boise becomes more liberal as one moves toward the city center.

Dr. Wuenschel’s worldview gradually expanded as she moved to California and then Arizona. She moved to San Francisco when she was 22 to study viola performance at the San Francisco Conservatory of Music. “I didn’t really have a lot of exposure to other people outside the school I was in,” she says. “Then, when I went to ASU, I started to branch out a little bit more.” When she was 24, she moved to Phoenix to pursue her doctorate at Arizona State University. She says that Dr. Nancy Buck, the viola professor at ASU, was her inspiration for coming to Arizona, but confesses she was “frankly intimidated and a little bit scared” of Buck after having a few lessons. “But she was also just a technical master,” she continues in a slightly hushed, admiring voice.

A cursory Google search of Allyson Wuenschel reveals her heavy involvement in the world of chamber music performance. Dr. Wuenschel started playing viola when she was in 5th grade, and one of her best memories of her childhood in Boise were the multiple chamber groups and youth string orchestras she participated in. Her biggest admiration of Boise is its thriving music program. Throughout her career, she’s performed in the Foster Family Band, Arizona Pro Arte Ensemble, MusicaNova Orchestra, West Valley Symphony, and Arizona Bach Festival Orchestra. Her online presence on social media also further reveals her youthful personality, as well as her dedication to chamber music. Many of her pictures show her holding her viola in playing position or close to her chest. A recent photo on Facebook features her smiling gleefully at the ceiling, wearing a bunch of fresh lettuce as a hat.

Dr. Wuenschel started teaching at Arizona School for the Arts as a viola teacher in 2011. She wanted to become a technical master of the “underdog of the orchestra.” For the non-music folks out there, violists are often made fun of for not playing well. Violists rarely have solos, but without them, the orchestra would sound a little bit empty. In the classroom, Dr. Wuenschel is meticulous, detailed, and persistent. She loves the fact that she can teach “just the viola, just what I know and love” with “a rich variety of young people.” She finishes, whispering, “the young people are just fantastic.” Certainly, her students feel the same way about her. Current ASA senior and viola student Alyssa Gerkin says that her favorite thing about being Dr. Wuenschel’s student is “…her patience and flexibility. [Dr. Wuenschel] has the ability to sense when there’s a negative vibe in the room, and she’s willing to sacrifice a bit of class time to check up on her students’ mental health.” Fellow strings teacher Maria Simiz says, “She has a wonderful ability to find the fun in most things.”

Dr. Wuenschel’s professional progress in Phoenix is the greatest indicator of her personal growth. She praises Phoenix as feeling “…like a new city. It feels like things are just starting to pick up and starting to grow, and that’s really exciting.” In the eight years that Dr. Wuenschel has worked at ASA, her students have noted an improvement in her happiness. Dr. Wuenschel herself admitted that, at first, she had a hard time adjusting to Arizona’s dusty brown color palette, which is very different than Idaho’s lush green forests. She might be grounded in a desert away from her favorite childhood pastime, but the Valley of the Sun seems to have given her the energy to be her best, most enthusiastic self.